This glass lamp is decorated with beautiful Arabic writing. What colours and patterns can you see? Look closer.

A mosque is a Muslim place of worship. Lamps like this one are hung from the ceiling by its handles or ‘lugs’.

You can see this in our video below about the Mosque lamp.

Can you imagine the beautiful shadows the light would have cast on the walls of the mosque when it was lit?

​Follow these easy steps to make your own lamp to cast shadows and light at home. 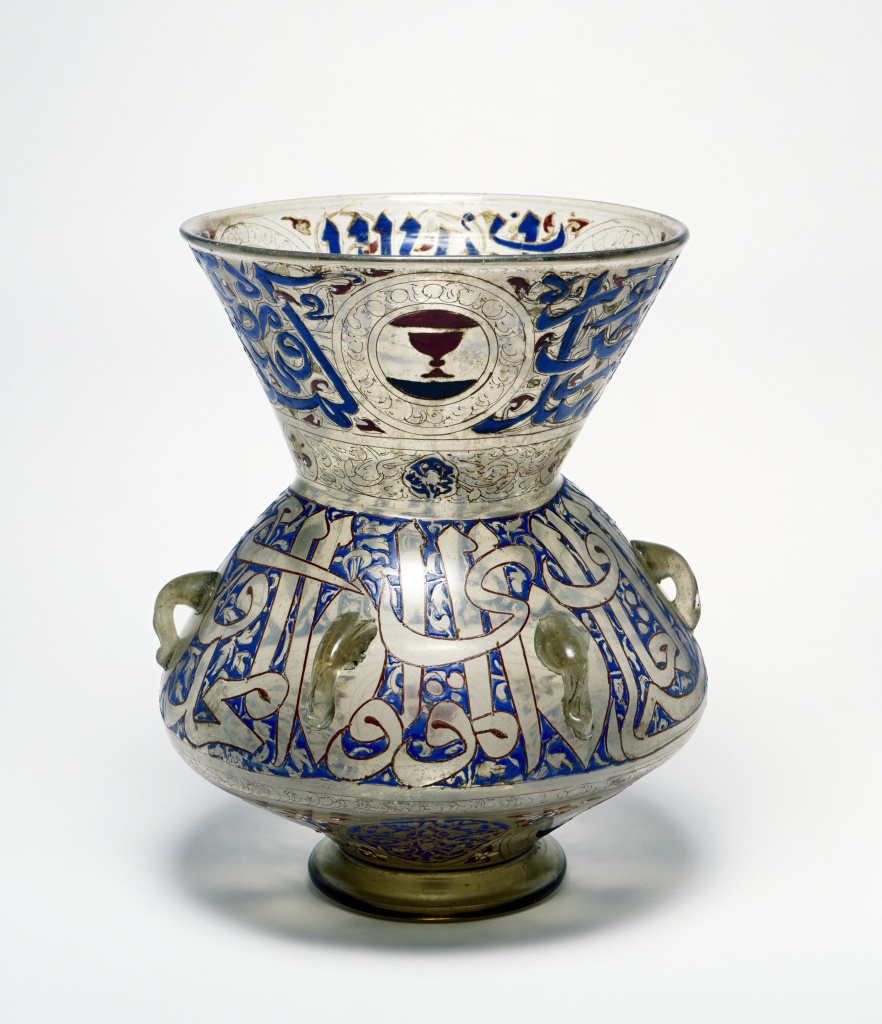 Egypt and Syria were united in the fourteenth century under Mamluk rule from Cairo, where many religious buildings were erected by the sultans and their officials. The mosques and mausoleums were lit by oil lamps in glass holders, which were suspended from ceilings by chains looped through the protruding ‘lugs’ on the sides. Mosque lamps of this shape decorated with coloured enamels (coloured glass paint), had become standard by the late 1200s. This spectacular mosque lamp is the finest piece of Middle Eastern glass in the Museum’s collection.

The Arabic inscription on the lower part of this example states that it was made by order of Shayku al-Nāsirī (d.1357), who built a mosque, monastery and tomb in Cairo between 1349 and 1356. On the neck, the inscription is broken by his emblem, a red cup, indicating that he was cup-bearer to the Sultan. In addition to their practical and decorative functions, mosque lamps had a symbolic role. Like a number of others, this one bears a passage from the Qu’ran, XXIV.35, known as the Sura (chapter) of Light it reads:

‘God is the light of the heavens and the earth. The parable of His light is as a niche, in which there is a lamp’.

You can find out more in this video made about the mosque lamp.

Make your own lamp at home. Cut a hole in a page of your sketchbook, or in an old cardboard packet or box.

Cover it with some of your colourful cellophane and let the light shine through.

How to make your own lamp

This version is great for little ones. It includes a colouring sheet of the lamp.