A Gust of Wind by Pierre-Auguste Renoir

Look closely at the clouds, and the moving trees – follow the artist’s brush strokes with your finger.

What marks has he made to create movement?  Are they quick, slow, broken or fluid?

Does the landscape remind you of anywhere you have visited?

Imagine you are in that place. Take a deep breath in, how does the air smell and feel? Is it calm and still or bracing and fresh on your face?

Imagine walking over the hills. Where would you go? What’s beyond the horizon?

Try capturing the wind yourself. Follow the video below on how to make a pinwheel! 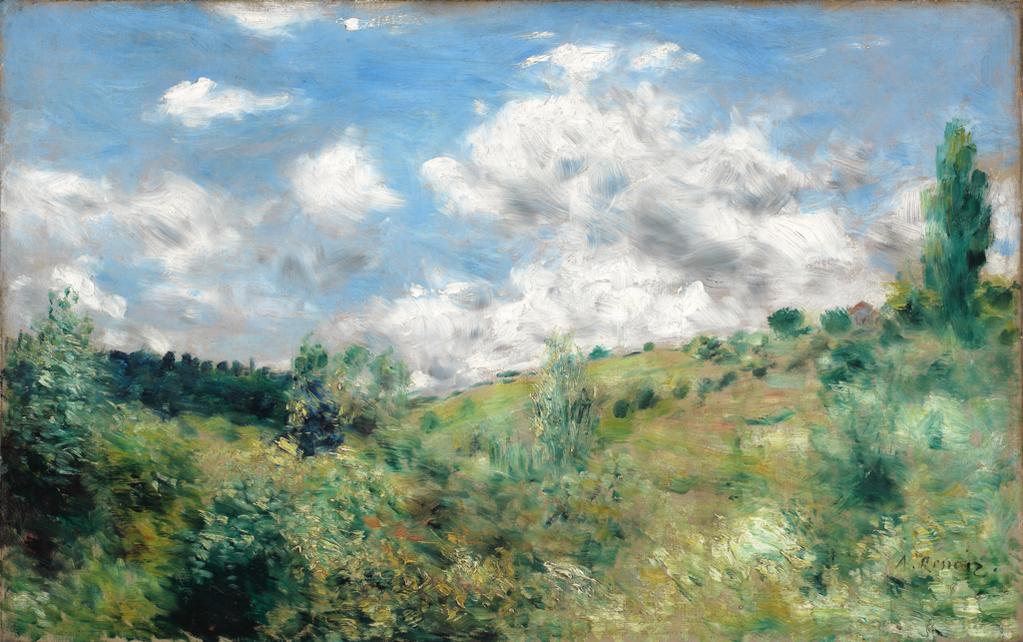 Do: Make your own pinwheel
Relaxing mindfulness walk into this painting

University Cambridge Museums have created this ‘Object in Focus’ video resource on this painting. Allow yourself some time out to relax, look and imagine with artist Filipa Pereira-Stubbs.

Renoir was part of a group of artists known as Impressionists. They were interested in recording an impression of a scene, capturing a moment and a sensation rather than how it looked. Renoir exhibited at the first Impressionist exhibition of 1874, but unfortunately his landscapes were not a commercial or critical success. By the 1860s his work had became increasingly dominated by the human figure and he rarely painted pure landscapes.

This painting is thought to represent a hill near Saint-Cloud, to the west of Paris, was probably painted around 1872. Day trips to the countryside were a new and popular activity for Parisians at this time, made possible by the development of the railways. It was now possible for many people to escape the summer heat, busy streets and city smells.

Renoir’s aim here is not so much to create an accurate representation of the landscape, but more to convey the sensual pleasures of the outdoors and to capture the most unpaintable elements: air. Our eyes are drawn to the movement of the trees, bushes & the racing clouds in the sky, all achieved by the seemingly simple act of blurring the paint.

If you would like to learn more about the Impressionist artists and other artworks we have in our collection, we have this handy online exhibition for you.